As architects, our virtual world we design eventually becomes a reality.  At least that is what our intentions are when designing the built environment (buildings).  We have many numerous tools, such as  complex computer programs like REVIT, a 3dimensional modeling program more difficult to fly than a 777 Boeing airplane  OR   Sketchup, equivalent to hopping on the neighbors bike for the first time and going for a joy ride.  Whatever tool is your fancy, we can develop ideas into a virtual reality. 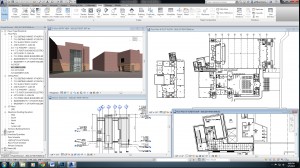 REVIT – Center for the Arts

About 10 years ago, I stumbled across TV glasses.  Skymall made it mainstream or so it tried, but the cost of the glasses were outside the reach of many.  It gave opportunity to immerse oneself into a world of movies or tv with little periphery distraction.  It’s displays however were still like watching a tv set, not following the motion of your head.  I thought it would be a cool idea to take this technology and use it somehow to present architectural ideas, but it was too premature.

Fast Forward 2012, Oculus Rift is developed, eventually purchased on March 25, 2014 by Facebook for 2 billion dollars to develop further for gaming platforms and other yet to be explored uses.  It contains LCD screens and 3-axis gyros, accelerometers and magnetometers to track head movement.  This allows the user to look around virtual worlds.

As an Architect, I have dreamed up scenario’s in which I could utilize a technology such as this to present my ideas.  Imagine developing designs in 3dimensions and incorporating this into a world that is becoming more digitized (Google Streets).  What if we could join the two together into a virtual presentation.

Imagine walking down a virtual street while a designer presents before and after views of the streetscape.  This would enable a designer to express their ideas with more reality. 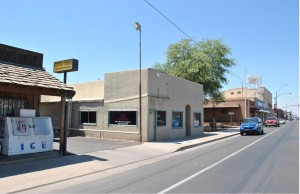 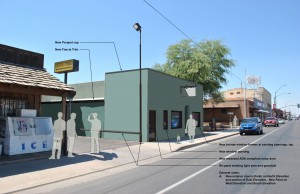 This could further be enhanced by entering a 3dimensional virtual world of a building, highlighting the spaces to get a sense of the spatial relationships.  I envision this not in an exact replica of reality, but more in a conceptual stage to convey ones ideas.  I feel that is has to be simple and affordable so designers can incorporate this into their projects.  Having to use someone who specializes only in creating virtual reality presentations will only stunt the creativity process.  Here is just one example of my virtual world, created in sketchup without holding onto the handlebars.

Now imagine if YOU could control where you walked and what direction you were looking in.

Remember, this is not reality, but virtual reality.

I am excited what the future has in store, are you?