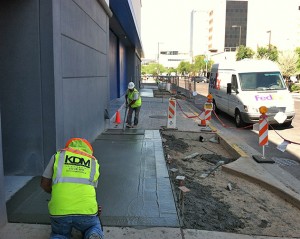 In 2010, Digital Realty, a world wide data center company completed an exterior upgrade on a local Phoenix landmark building.   The building was built in 1947 for the Arizona Republic and then bought in late 90’s by Sterling [now I/O], and purchased by it’s current owners, Digital Realty in 2006.  Isn’t is interesting that the building was built for a newspaper printing company with steady news on paper and now it has digital data constantly flowing in through colorful cables. This is Jeffrey’s post, but I had to add that.

On a hot May Day back in 2012, Gary and I took a walk around the building.  It is located smack in the middle of downtown Phoenix, bounded by major streets named after past Presidents.  We have Van Buren on the South side, Polk on the North and 1st and 2nd streets frame its East and West boundaries.   As we walked the exterior, Gary pointed out sidewalks with various finishes,  irregular cut sandstone (cheesy Southwest), salmon colored concrete (making you hungry), and grey concrete (exciting).  It had been butchered throughout the years to allow for utilities to enter the building, feeding it power, water and data. 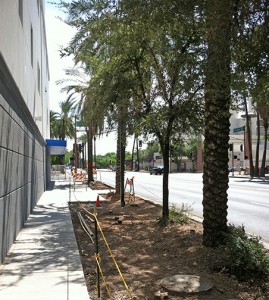 We both agreed something needed to be done to bring the sidewalks up to the sleek elegance of the recent exterior building make over including new texturing, paint, lighting and signage.  We both knew the City would expect something in return for upgrading sidewalks.  Did they want our first child?

In a long extensive back and forth tennis rally, working with the City of Phoenix Streets Department, Economic Development, we came to an agreement on new LED street lighting, with a resolution to who was to install and pay for this extra expense that we did not anticipate or plan to cover. 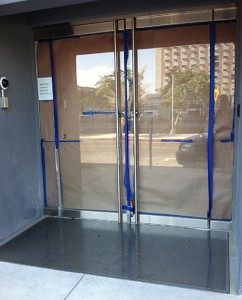 The project is now in final stages of completion.   Sidewalks have been pulverized into small pieces, removed and replaced with new shiny, ok actually dull grey concrete which compliments the Grey Digital exterior and matches the City of Phoenix standard sidewalks.  The new plants add a touch of green.  Digital Realty exterior upgrade at 120 East Van Buren will be complete.