The trip to Los Angeles was mostly to see the Retrospective show on James Turrell at the Los Angeles County Museum of Art.   I was attracted to the show mainly to experience the hype in Light, Action, The alternate realities of James Turrell by Wil. S. Hylton in the June 16, 2013 New York Times Magazine.  Jeffrey has a thing for lighting so I thought it would be fun.  A very wise architect told me I needed to know about James Turrell.   There are actually 3 different shows in 3 separate museums that Turrell is taking on.  The LACMA pieces are obviously ongoing but I am pretty sure he is in Texas for another huge installation at the Museum of Fine Arts, Houston, and then to Manhattan, where is opening a show the Guggenheim. I cherished my tickets I had bought a month earlier, the show was sold out the day I was there. 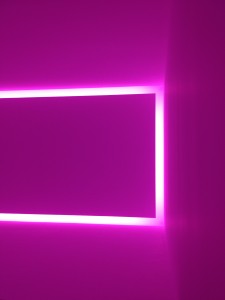 The best way to take in James Turrell is slowly. There were docents in each of the rooms so security was tight.  When I went into the Shallow Space room I was blown away by hot pink light that penetrated my senses.  I appreciated Turrell’s finely crafted white plaster benches that folded into the walls like soft whipped meringue. Nothing was left to chance in these tightly organized rooms.  Everyone was mostly hushed which was nice.  Once I sat for about 12 minutes in Shallow Space the pink light did start to turn whiter.  After I was busted for taking the above photo I left Shallow Space and into Cross Corner Construction. My eyes had been conditioned, everything including the walls was avocado green with another hologram in the corner.  We asked the docent if the walls were painted green, she said, “No, they are white.” Eventually the green faded to the white plaster. Turrell is clever to play with complimentary colors. 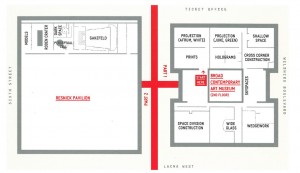 I know this diagram is small.  You can enlarge it by clicking on it.  This is the floor plan for the exhibit room.

Naturally I was curious about the Perceptual Cell, the climax of the show and booked solid until January of 2014. The Perceptual Cell is a hollow globe about the size of an SUV.  There is a cut out for a drawer about 18 inches by 30 inches. When the drawer is pushed out it is about 6 feet long. There are black carpeted steps up to the drawer with 2 clinical chic docents that facilitate the viewer in laying down on their back in the drawer.   I watched the viewer get pushed into the globe.  There is a panic button for the viewer inside and a dime sized lookout for the docent.  I asked one of the docents what he thought of the Perceptual Cell. He said it was like his eyeball had become one with something like a planetarium Pink Floyd light show. At one point the strobes and lasers were getting so intense he shut his eyes. He went on to say even with closed eyes and using his arm as a shield, he could still see the strobing lights.

Model study found at A Retrospective James Turrell, LACMA. Kind of reminds me of the Perceptual Cell.

Dark Space was awesome.  In this exhibit I was instructed to hold onto the wall railing and walk down a dark hallway that had 2 bends in it to black out the light from the waiting area. With each 90 degree turn it got darker. I held onto Jeffrey’s shirt so I wouldn’t run into a wall. Once we got to the end it was a matter of feeling my way to the fixed seating.  I was giggling because it was so ridicoulsly dark that I felt out of control and a little freaked out. I thought some dragon was going to come up and breath fire on me or something.  I was instructed to just look ahead. It was nice to have Jeffrey there on the other stool to say, “Hey, did you see that?  While sitting for the required 15 minutes very weird things started to happen. For one, I had to intentionally blink because I didn’t believe my eyes were open in the blackness, but they were open. It was the same blackness with my eyes closed as it was with my eyes open. I could visually feel my brain trying to find what it needed to see.  It didn’t take long for a soft peach light to appear, trust me…Jeffrey saw it too.  The peach light would flutter a bit like a fuzzy distant apparition trying to complete itself. For me, the apparition was trying to complete itself but the darkness kept clipping the sides. As I emerged from the darkness, the light in the sanctuary was blinding! I spoke with another docent about other viewers experiences in Dark Space. She heard all kinds of crazy stories of  course. They probably saw Elvis.  I asked her if there was indeed a soft peach light source in the room and she said no. She said that the only thing that was in the room was a painted circle of white on the far back viewing wall which is in complete darkness.  It was awesome to watch my eye and brain work at perceiving something that wasn’t there. Or was it?

One response to “LACMA: James Turrell”