Last summer, I had the opportunity to travel along the Western coast of Washington State in the Olympic National Park.  It’s vast mountain ranges with it’s hundreds of thousands of acres of pristine undisturbed forests, it’s 73 miles of coastline, give you a sense of tranquility.  However, I stumbled upon something which left me feeling unsettled.

We visited a well-known coastal beach, Ruby Beach.  It’s very impressive with it’s monumental Sea stacks.  On our way down the path to the beach I saw a very dis-concerning sign.  What to do in the event of a Tsunami, where to go!  My plans to spend hours building an 8th Wonder of the World sand castle only be destroyed by a wave was squashed.

This evacuation plan essentially said “Run like hell to the highest point!”   I definitely would obey if I saw a looming wave coming my way.    All I could conjure up was videos I had seen on YouTube of the Tsunamis around the globe. Tranquility (T-RAN-Quility), no more.

As an architect, one of our responsibilities is to create buildings which are safe that have a clear path to exit, just in case you have to “Run”.  We all had fire drills in elementary school, right?

Recently, I had the opportunity to prepare one of these plans for a building.   By code, a building has to prepare evacuation maps (floor plans) for public buildings to teach people how to exit from that building.  Who better else to do so, an Architect.   In a small building, it’s likely obvious, but when you are within a large building with multiple floors and various paths of travel, it does become important.

This building has 6 floors and over 300,000 square feet. The plans typically show where the stairs, elevators, fire extinguishers and the fire pulls.  I learned at elementary school never to play with one.

The code doesn’t really tell you where they should go, just what should be on them.  Typically it’s at the elevator lobby.   Essentially, the plans are graphic design projects because they have to be clear, accurate and look pretty. 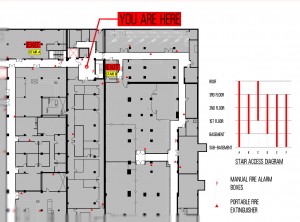 So hopefully in your travels on a Washington Coast beach or within a large building, you’re only running when nature calls.