Hobo Joe sculpture, constructed in 1967 by Marvin Ransdell in Downtown Phoenix for a local Restaurant chain.  The sculpture was never erected at the restaurant but remained in fabricators yard until 1989, where it was erected in Downtown Buckeye just outside Gillums Meat and Locker.  It became a tourist destination until it was purchased and removed from that location for a restoration project beginning in 2016.  From 2016 – 2020, Hobo Joe was in hiding but slowly was getting a much needed facelift.  Repairs included fiberglass repairs and paint restoration.  During that time frame, Serbin Studio assisted the Buckeye Mainstreet Coalition with looking at various locations to re-erect the sculpture.  Locations included city parks but ultimately in landed on private property located at Monroe & 5th Street in Downtown Buckeye.

During the Hobo Joe initial removal, the sculpture was essentially cut loose from its foundation at the feet.  The fiberglass sculpture is constructed around a steel tube structure within.  Serbin Studio along with structural engineers determined methods to add additional steel to strengthen and allow for it to be installed within a new foundation base.  The challenge was that welding or attachments were difficult because it was impossible to get up within the fiberglass shell.  Once the design and details were completed, a building permit was obtained and fund raising for the construction costs pursued.  Local contractors stepped forward to assist in the construction of the foundation which was ~7′-0″ deep by 4′ x 4′ wide. 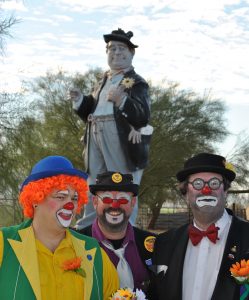 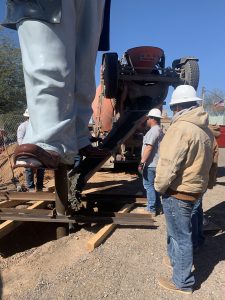 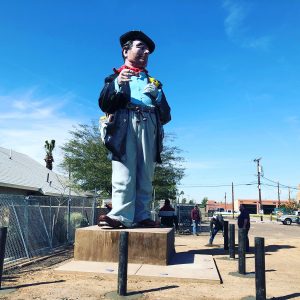 Designed for a public art installation in Downtown Historic Buckeye.   The sculptures are located along Monroe near 6th street.  The design incorporated 4 sculptures which depicted the history and culture of Buckeye. 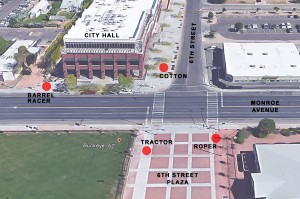 The sculptures are constructed of 3/8″ thick steel.  Portions were allowed to have a rust patina finish while other pieces were powder coated.

The sculptures include a tractor symbolizing the farming community.  A barrel racer  symbolizing the infuence of the rodeos held throughout the year.  A Roper to symbolize the ongoing ranching and cattle.  A cotton Boll to represent the farming of cotton in the surrounding farmland. 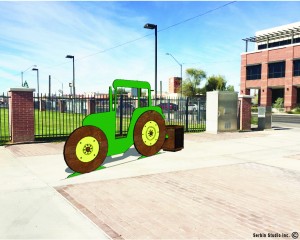 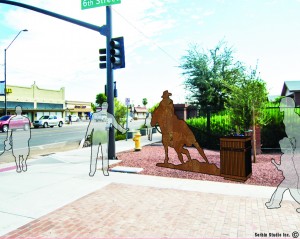 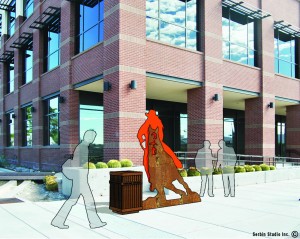 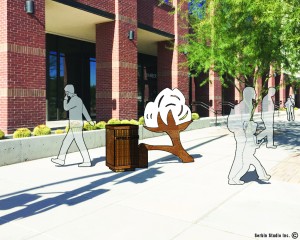 This project is just the beginning for more art to be interwoven into the Historic Buckeye fabric.  The project is completed by early summer of 2016. 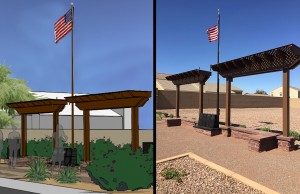 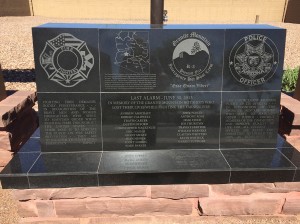 In the summer of 2013, a forest fire in Yarnell, Arizona claimed the lives of 19 fire fighters from the Granite Mountain Hot Shots from Prescott Fire Department.

The Homeowners board were deeply affected by the sacrifice these of the men to protect not only the forest but the surrounding homes/business.  Shortly after, Serbin Studio was asked to design the moment located in Buckeye to honor these men and all first responders, from Fire Fighters, police and members of the armed forces. 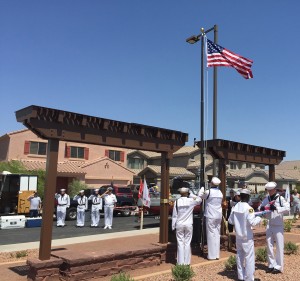 The design pays respect to those lost in the line of duty but also to honor the current first responders who put their lives in harms way to protect others in the community. 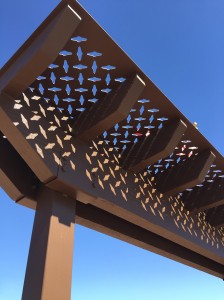 The monument uses materials such as local stone from Prescott and perforated metal that reflects on the diamond pattern commonly found on rescue vehicles.

Estrella Elementary School located in Goodyear Arizona was the first elementary school built in Estrella when Charles Keating began the 20,000 acre desert development.  Today, the school is celebrating 25 years of success and is looking to improve not only the educational environment by becoming a International Baccalaureate Word School but improving on the experience the children have throughout their school day. 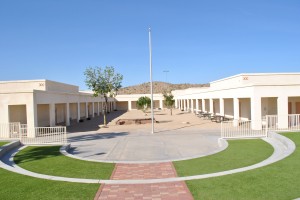 Existing Courtyard (Why is everything so beige in Arizona)

Serbin Studio was approached to take a look at a particular space, a courtyard surrounded by the 6 – 8 grades, to create an environment that can be used by the classrooms as well as beautify the un-utilized space between buildings.  Living in a desert community with an average of 300 days of sun per year, it was important to provide shelter from the Arizona sun.

Through our site analysis, we saw the great potential for developing multiple spaces for teachers and students to interact in various scales, from small student gatherings of a few to an entire outdoor classroom setting.  The space was a blank canvas in which to create our vision.

Through a series of meetings and presentations, we sat down with key members of the school staff, from the school principals, teachers and Estrella PTO (Parent Teacher Organization).  We also observed how the students currently use the space.  With this input and through our observations, we came up with some key goals.

1)      Accentuate the current circulation through the space

6)      Create a pleasant view from the main school offices 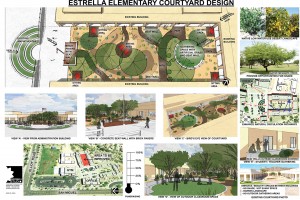 The project is currently in the funding phase and looking for any volunteers and dollars to make this a reality.  For more information, check out the Estrella Moutain Elementary Facebook page. 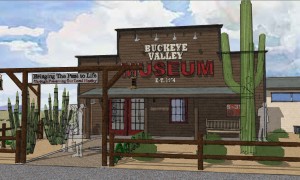 The museum located on Monroe Ave, the main street of downtown Buckeye was founded in 1954.  It houses a collection of artifacts showing and preserving the history of Buckeye.  The Musuem is dedicated to better understand and appreciate the archaeological, historical and cultural significance of Buckeye Valley and its communities.  Serbin Studio was asked to provide a conceptual design for the exterior of the building, a façade improvement to reflect their mission and bring a visual awareness to the building.

The building originally was designed to resemble the Kell Store in Buckeye but throughout the years, was painted to nondescript beige color scheme and lost all its character. Additions throughout the years also created a confusion to the visitor into which doorway was the main entrance.  This was a one of the issues to resolve.  Serbin Studio did historical research to inspire and provide a new branding of the museum façade that the City and its residents would be proud of.  The new exterior design reflects upon Buckeye original roots to farming  The building hints towards historic building of the past that unfortunately were destroyed, The Roxy Movie Theater,  The building also reflectes upon the importance of preserving history, Like the examples set by Roman at the Hillbilly Hilton.

Through the use of materials and textures, the Museum’s Conceptual Design has sparked renewed interest into the History of Buckeye. 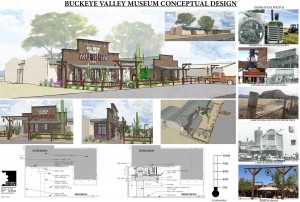 The center is located in Wickenburg, Arizona.  Serbin Studio provided programming (fact gathering) and master planning services to re-develop the existing building for its future needs.  The current facility at 6,500 square feet is planned to be expanded to over 14,000 square feet to handle Wickenburg growing senior community.  The building is to offer a full service dining facility, meeting rooms, game rooms, computer center, library, offices and a food distrubution center for families in need of assistance.  The design is reflective of Wickenburg’s history which is influenced by mining, the railroad, its desert climate and the ranch lifestyle.  Like the camouflage of  an owl, the buildings materials are designed to blend into its surroundings.  The building is currently in the conceptual design stage.

City of Phoenix Center for the Arts – Phoenix, Arizona

The facility has served as a community arts center for the last 50 years. The center includes performing arts, ceramics, glass, fibers and metal art workshops. The project is a renovation and addition of an existing building as office and storage space , utility upgrades, ADA compliance and lobby entry space in the basement and upper level conversion of an existing brick structure from the 1960’s. The new three story reception serves as an egress exit and entrance on the North side of the park. In the past the building turned its back on the patron arriving and parking on the North side. The new steel stairway and elevator tower connect the North Building to the South Building allowing ADA patrons to enjoy all the programs the facility has to offer. Read the full story of this project on the Serbin Studio Blog! 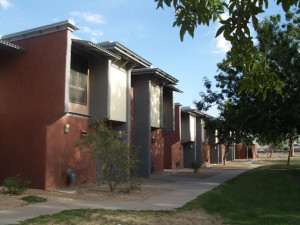 Foothills Village is owned and operated by the City of Phoenix Housing Department. The 20 acre public housing site has 200 multi-family apartments. The renovation project was intended to improve the appearance of the buildings, reflect the new developments of the surrounding neighborhood and provide a better living environment for the residents. Through the use of color, texture and architectural enhancements, the existing buildings were dramatically improved. A new central plant and chiller system was designed to replace the boiler system and roof top units. By implementing this system, water usage was reduced by 40 percent.

City of Phoenix Center for the Arts Theatre Renovation

This project is a renovation of an existing Baptist church that was built in 1965 into a 500 seat theater with proscenium stage.  The building is a part of a cluster of buildings that make up the Center for Arts located along the I-10 deck park along 3rd Street in Phoenix, Arizona.   Serbin Studio worked with Westlake Reed Leskosky during the programming and design phase to assign square footage to the numerous functions that were required.   The basement was designed with back of the house spaces such as public spaces, performance spaces, stage support, performer support, services, Parks and Arts Departments shared spaces, Arts and Business Council and vertical circulation.  Some of the performer support spaces were chorus dressing rooms, principal dressing rooms, wardrobe and laundry, green room and catering kitchen.   The first floor is designated primarily for the stage and seating.  Since the building is along the First Fridays Art Walk, a first of the month open gallery event, there is an art gallery within the concession and ticket office.  The second floor is mostly for the control room, cat walks, a multi-purpose room for rehearsal, and storage. 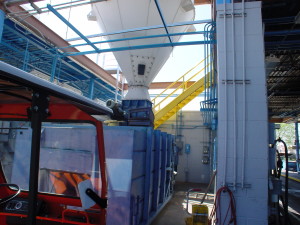 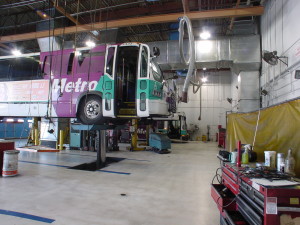 The North and South Maintenance Facility projects included roofing, electrical, mechanical and accessibility upgrades over 3 year period between 2004, 2006 and 2007. The design team developed a complete design package and associated bidding documents for the project within the city budget.